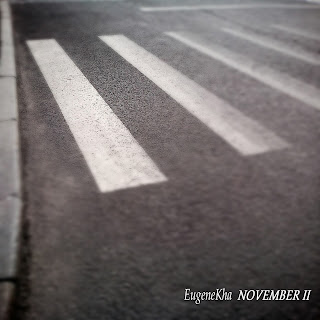 EugeneKha (a.k.a. Evgenij (Eugene) V. Kharitonov) returns to SPNet after last year's Light Hour Of Darkness (SPNet069), a collaborative effort between two of his many projects. This time around, the multitalented Russian performs live for the second installment of the Tape Drone series. Like Light Hour ..., November-II consists of a single track, a droning ambient monolith that slowly, consistently churns and thumps, mostly in the low end, while higher tones reminiscent of computerized bleeps and bloops dance over the top, then fade away, replaced with menacing gurgling tones and odd, faint mechanical wails. These are soon accompanied by more pleasant high register washes, creating an interesting tug-of-war between the ethereal and the disturbing. The bloopy tones even come back after some time and the whole construction strikes an interesting organic sort-of tone, as if this was merely a recording of some living mechination breathing. Much like the work of Pollux, this is engaging drone ambient material that will appeal to aficionados of the genre and act as an ambassador to those who just do not understand it.